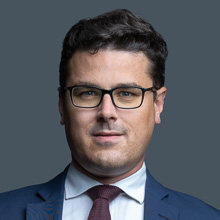 Augustin Barrier is a member of several professional associations, including the Young Arbitrators Forum of the ICC (YAF), the Young International Arbitration Group of the LCIA (YIAG), CFA-40, Young ICCA, Young ITA, ASA below 40 and the African Arbitration Association (AfAA). He is a co-Founder of the Swiss Chapter of the ENERAP (Energy-Related Arbitration Practitioners) association.

“Associate Augustin Barrier’s expertise and knowledge in the case is particularly advanced. Particular emphasis should be placed on his skills to prepare witnesses for the proceedings. Patience, empathy capacity, perfect process (case) management, ability to establish mutual trust between client and legal representative.”

Guinea: Outlook on investment protection one month after the coup

Investment Disputes in a Post-BIT World

Skills Training Workshop: “Help, I have been Assigned to a Gas Pricing Arbitration!”