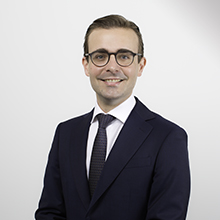 Pierre-Yves Marro joined LALIVE in 2020. He specializes in complex domestic and multi-jurisdictional proceedings and investigations, including fraud and white-collar crime, asset recovery, international mutual assistance, and international sanctions. Further, he has broad experience in public international law, including, with respect to international organizations, immunities, and privileges.

Pierre-Yves Marro graduated from Zurich University School of Law (lic. iur., 2007), from which he also obtained a Ph.D. (Dr. iur., 2009, awarded with the Prix Paul Guggenheim and the Professor Walther Hug Prize). Moreover, he holds an LL.M. in international legal studies from NYU School of Law (2010) and completed a habilitation in public international law and European law at Zurich University (Privatdozent, 2020), where he serves as a lecturer. His research and publications focus on public international and European law as well as on procedural law.

Impact of Brexit on Asset Recovery in Switzerland

The Union’s Legal Personality: Ideas and Questions Lying Behind the Concept