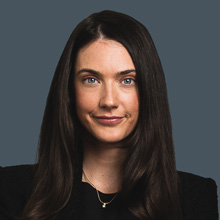 Eden Jardine joined LALIVE in 2020 as an international trainee and in 2021 was promoted as an associate. Her main area of practice is international arbitration, including commercial and investment treaty arbitration across the mining, energy, joint venture, construction, foreign investment and technology sectors. She has experience in international disputes conducted under various arbitral institutional rules, including ICSID, ICC, PCA and FAI, as well as ad hoc proceedings (UNCITRAL) governed by substantive and procedural laws including English, French, Singapore, Korean, Swiss and international law. She also acts as tribunal secretary.

She is a member of several professional associations, including the England & Wales Law Society, the Law Institute of Victoria, the Australian Centre of International Commercial Arbitration, the Silicon Valley Arbitration & Mediation Centre, the Asian Academy of International Law, the DIS40, the London VYAP and Women in Mining Switzerland.

Before joining LALIVE, Eden Jardine worked with the international arbitration team at White & Case in Frankfurt (2018-2020) and interned at international dispute resolution firms in Berlin and Hamburg. She holds a Bachelor of Business (Management) and a Bachelor of Laws (Honours) from La Trobe University, Australia, a Graduate Diploma of Legal Practice from the Australian National University and a Master of Laws in International Dispute Resolution from Humboldt University of Berlin, Germany.