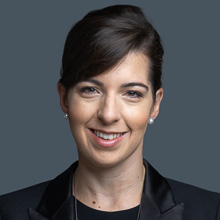 Courtney Furner joined LALIVE in 2017. Her main area of practice is international arbitration, including both commercial and investment treaty arbitration, related to complex disputes involving infrastructure projects and the pharmaceutical industry.  She has acted as counsel in numerous arbitration proceedings under various procedural rules, including the ICC Rules, ICSID Rules, LCIA Rules, UNCITRAL Rules and CIETAC Rules.

Courtney Furner is an active member of numerous arbitration associations including Young ICCA, ACICA45, ASA below 40, DIS40, and ArbitralWomen.  She is presently Co-Chair of the Young ICCA Mentoring Programme and the international representative of ACICA45’s Steering Committee.

Before joining LALIVE, Courtney Furner worked as Associate to the Honourable Justice Robert Mazza of the Supreme Court of Western Australia, Court of Appeal (2015-2016) and in the dispute resolution team of Norton Rose Fulbright (2010-2014) in Perth, Australia.  She has also tutored on civil procedure at the University of Western Australia, volunteered as a Humanitarian Observer with the Australian Red Cross’ Immigration Detention Program and interned at the United Nations International Criminal Tribunal for the former Yugoslavia in The Hague.

Courtney Furner holds a Bachelor of Laws and a Bachelor of Arts from the University of Western Australia (2011) and an LL.M. in International Dispute Settlement (MIDS) from Geneva Law School and the Graduate Institute of International and Development Studies (2017, MIDS-Young ICCA Scholar).  She has also undertaken legal studies at various universities and academic institutions in Austria, Germany and The Netherlands.  In 2015, Courtney Furner was named Junior Woman Lawyer of the Year by Women Lawyers of Western Australia for her contribution to the legal profession in less than five years of legal practice.  In the same year, she received the International Bar Association’s Dispute Resolution Scholarship for an award-winning essay on international dispute resolution.

Eyeopeners – The Enlightening Effect of Site Visits in Construction Disputes