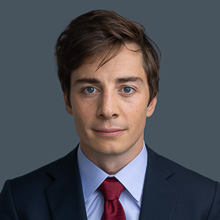 Nicolas Pralica joined LALIVE in 2021 and specialises in investment treaty arbitration, commercial arbitration, and public international law. He has acted as counsel for investors and States in several investment treaty disputes and in commercial arbitration cases under ICSID, ICC, LCIA, SCC, UNCITRAL and IACP rules governed by a variety of substantive and procedural laws including English, French, and Spanish laws. He has particular experience in international disputes in the mining, construction, oil and gas, telecommunications sectors. Nicolas Pralica also has acted as arbitral secretary in half a dozen arbitration cases, mainly in the construction sector.

Nicolas Pralica has been acting as Director of the Advanced Programme in Investment Arbitration (APIA) at the Paris Bar School where he has been lecturing on investment treaty arbitration and coaching the students in the Skadden Arps’ Foreign Direct Investment (FDI) Moot since 2017. Under his supervision, the Paris Bar School was awarded prizes for First Highest Ranked Claimant Memorial in 2017 (2017 TDM Journal 5), Third Highest Ranked Claimant Memorial in 2019 (2019 TDM Journal 6) and Second Highest Ranked Respondent Memorial in 2021 (to be published in TDM) and reached the Final in the Global Rounds in 2020 out of more than 140 participating universities.

Before joining LALIVE, Nicolas Pralica trained with Cleary Gottlieb and Three Crowns in Paris (2015-2016) and went on to work as an associate at Dechert in Paris (2017-2018). He subsequently worked as an arbitral secretary in three high-value construction cases seated in Geneva and Miami, along with other arbitration cases in the retail and aviation industries seated in Paris (2018-2021).

Nicolas Pralica graduated with an LL.M. degree (with honours) from Harvard Law School (2019-2020) after qualifying as a barrister in England & Wales with a Graduate Diploma in Law (commendation) and passing the BTT/BPTC (‘very competent’) with BPP Law School, London (2018-2019). Before completing his legal education in the United States and the United Kingdom, Nicolas earned a Master in Economic Law from Sciences Po Paris (2014) and a Master in International Arbitration, Commercial Litigation and ADR (with distinction) from Paris II Panthéon-Assas University (2015). During his studies, Nicolas was part of the team which represented the Paris Bar School in the 2016 Skadden Arps’ FDI Moot and won the Global Rounds in Buenos Aires. Nicolas was awarded the Prize for Best Advocate in the Final Hearing by Gabrielle Kaufmann-Kohler, Guido S. Tawil and Raúl Vinuesa.

Nicolas Pralica originally graduated with a Bachelor of Science in mathematics and physics, and a Master of Science in financial mathematics, economics, and computer science from Ecole Polytechnique (2014), with a Master specialising in corporate Finance and microeconomics from Ecole Nationale de Statistiques et Administration Economique (2015). He worked as a financial analyst for EY and Natixis Corporate and Investment Banking in Paris, France, and Safran Morpho in Sydney, Australia.

Assignment of claims in investment arbitration

Valuation of damages in investment arbitration