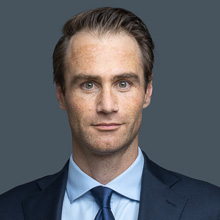 Tino Schneider joined LALIVE in 2016. He specialises in international commercial and investment arbitration, with a focus on disputes involving construction projects, intellectual property, merger and joint venture agreements, and issues arising in the energy and transportation sectors. He has acted as counsel in numerous arbitration proceedings under various procedural rules, including the ICC Rules, UNCITRAL Rules, SCC Rules, Swiss Rules, and DIS Rules.

Before joining LALIVE, Tino Schneider worked at the Permanent Court of Arbitration in The Hague (2015), where he provided assistance to arbitral tribunals in numerous investor-state proceedings conducted under the UNCITRAL Arbitration Rules. He previously worked as an associate at Hengeler Mueller in Frankfurt a.M. (2012-2015), focusing on international arbitration, domestic and cross-border litigation and intellectual property.

Tino Schneider passed his first and second state examinations in Munich in 2007 and 2009, respectively. He holds an LL.M. from Columbia University Law School (2012), where he was a Harlan Fiske Stone Scholar. He also holds a Ph.D. in intellectual property and competition law from Ludwig-Maximilians-University in Munich (2014). He was a research fellow at the Max-Planck-Institute for Innovation and Competition (2010-2011) and studied business administration at the University of St. Gallen, Executive School of Management (2012-2014).

Tino Schneider “combines deep technical knowledge, superb strategic thinking and outstanding advocacy skills.” He possesses “a very sharp legal mind” and is hailed as “one of the best construction lawyers of his generation.”

Tino Schneider is "a strategic mastermind with outstanding analytical and cross-examination skills". One peer adds, "You do not want to face him as opposing counsel”.

He garners commendation as a “supremely talented lawyer” with “unparalleled expertise in construction arbitration”.

Listed among the Future Leaders in Arbitration

Listed among the Future Leaders in Construction

Listed among the Future Leaders in Arbitration

Listed among the Future Leaders in Construction

The View From Europe: What’s New in European Arbitration

The Application of Swiss Law to FIDIC Contracts

Implications of sanctions on energy-related arbitration

For more information, see the programme

For more information, see the programme

Bonds in construction disputes – weapon of choice or last resort?

Who pays the bill? Separate deposits, security for costs, and allocation of costs