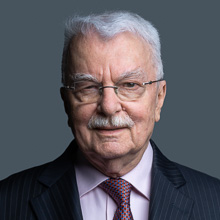 Ranked in the Hall of Fame, Michael Schneider has expertise in energy and construction claims. Testimonial: “LALIVE have a high functioning team that delivers seamless advice and documents from the firm. It is a well-oiled machine that is focused, smart and timely. I have been very impressed by the dedication of its staff to deliver an absolutely first-class product.”

Michael Schneider is “highly experienced in investment and commercial arbitration” remark sources who add he is “a great, client-oriented lawyer”.

Michael Schneider is “very respected” in the market.

Who's Who Legal, Switzerland: Arbitration, 2020

Michael Schneider is a long-standing figure in the Swiss market, ranking highly for his wealth of experience on high-value construction disputes.

Who's Who Legal, Construction and Real Estate, 2020

Michael Schneider is “one of the most prominent figures in Switzerland” for arbitration and is a “very impressive” practitioner”, comment sources. His expertise covers disputes in the construction, infrastructure, telecoms and pharmaceutical sectors and involving both states and corporations.

Michael Schneider comes “highly recommended for his impressive and efficient practice”. He specialises in disputes involving states and corporations in the construction and engineering industries.

Michael E. Schneider is a well-established figure in the Swiss market where he stands out for his “enormous experience in construction arbitration”. He comes “highly recommended for his impressive and efficient practice”.

Who’s Who Legal, Most Highly Regarded in Arbitration, Switzerland, 2019

Peers say that Michael Schneider's superb reputation in the Swiss market is a key source of work for the firm's commercial arbitration practice. In addition to his work as counsel, Schneider is frequently appointed as arbitrator on commercial and investment treaty cases. He attracts particular praise for his experience in construction arbitrations involving projects in Europe and the Middle East.

Chambers Global, Europe-wide, Arbitration (International) and Most In Demand Arbitrators, 2018

Michael Schneider has long-standing experience acting both as arbitration counsel and as arbitrator on domestic and multi-jurisdictional disputes relating to infrastructure projects, breach of supply agreements and partnership dissolutions in the transport and energy sectors. Peers state that he is a "very well-known figure" in the Geneva market and highlight his "attention to detail."

“Legendary arbitrator” Michael Schneider is internationally respected as “a top name” in the arbitration arena, is highlighted for his “outstanding” expertise.

Michael Schneider is a “very effective leader in hearings.”

Michael Schneider is an “outstanding” practitioner who is commended for his “quick grasp of complex issues”.

A "highly respected international arbitration practitioner" with expertise in energy disputes, construction and price review arbitrations, as well as investor-state disputes. "He is a real star and one of the smartest lawyers in the market."

Michael Schneider "is the most formidable Swiss practitioner, with great experience and real stature." "He has a lot of charisma and is an impressive advocate."

"He's extremely hard-working, thorough and responds as things arise and develop during hearings."

Michael Schneider “is one of the biggest names in the business,” he is “effortlessly intelligent” and “supremely efficient”.

The “outstanding” Michael Schneider is a founding partner of the firm, and with more than 40 years of experience in this field he is considered to be “one of the forefathers of arbitration in Switzerland.”

"One of the leading names in arbitration," Michael E. Schneider is a distinguished arbitrator based in Geneva who regularly presides over multi-jurisdictional disputes. He is also praised by clients for "offering absolute pragmatism in his approach."

"An expert, offering absolute pragmatism in his approach. He is so well known, it is difficult to add to his prestige."

Lauded as ‘first-class’ and ‘one of the titans in this field’. ‘A tireless and extremely dedicated’ practitioner.
‘He is incredibly experienced in international arbitration, and is a sharp and pragmatic lawyer’. He has advised on numerous multibillion-dollar disputes involving parties from a range of industries, such as gas price reviews, and cases concerning telecommunications and construction.

‘Extremely thoughtful’ and ‘encyclopaedic in matters of arbitration’.

The International Who’s Who of Commercial Arbitration, 2014

Among 25 most highly regarded individuals.

The International Who’s Who of Commercial Arbitration, 2014 and 2013

‘Arguably the best lawyer in the field of arbitration’.

‘Extremely sharp, tenacious and diplomatic’. Michael Schneider has an excellent reputation as an arbitrator and counsel. Sources say, ‘Even though he’s really busy, he always has time to speak to his clients’’.

‘He is a brilliant mind and an amazing counsel’.

The Paper Tsunami in International Arbitration Problems, Risks for the Arbitrators’ Decision Making And Possible Solutions

The Role of the State in Investor-State Arbitration – Introductory Remarks

In: Shaheeza Lalani and Rodrigo Polanco Lazo (Eds.), The Role of the State in Investor-State Arbitration, BRILL, NIJHOFF, Volume 3, pp. 1-13

In : B. Ehle and D. Baizeau (éds.), Stories from the Hearing Room: Experience from Arbitral Practice. Essays in Honour of Michael E. Schneider, Wolters Kluwer, 2015

Assistance to the Tribunal: Options, Advantages and Dangers

Welcome Address and Introduction to the Conference Topic

The Essential Guidelines for the Preparation of Guidelines, Directives, Notes, Protocols and other Methods Intended to Help International Arbitration Practitioners to Avoid the Need for Independent Thinking and to Promote the Transformation of Errors into "Best Practices"

In: Wirth, Rouvinez, Knoll (Eds.), The Search for "Truth" in Arbitration: Is Finding the Truth What Dispute Resolution Is About? Chapter 5, ASA Special Series No. 35, pp. 63-69

The revision of the UNCITRAL Arbitration Rules: Some observations on the process and the results

How fair and efficient is the UNCC system? A model to emulate?

Report at the Seoul Conference of the International Council for Commercial Arbitration, ICCA Congress Series, No. 8, 1996, pp. 57-99

Contracts and Dispute Settlement in Civil Engineering and Construction of Plants, 1995, Vol. 4, pp. 187-244

Technical experts in international arbitration, introductory comments to the materials from arbitration practice

International organizations and private persons: The case for a direct application of international law

(in collaboration with Paolo Michele Patocchi) Arbitration, the Journal of the Chartered Institute of Arbitrators, 1989, Vol. 55, pp. 268-280

Where public meets private: International law and the dynamic interpretation of treaties in the context of the draft UNCITRAL Rules on Transparency

05/02/2013 New York Michael E. Schneider Conférencier : The provisions of the Standard concerning its scope of application

Inside the black box: How arbitral tribunals operate and reach their decisions

22/11/2011 Oslo Michael E. Schneider Panéliste : Does international arbitration assume that contracts are written on their own terms or as an interplay with the applicable law? - Panéliste : Impact of intellectual property rules and of the arbitrability on the enforceability of arbitral awards

The Costs of International Arbitration Conference

18/07/2011 Paris Michael E. Schneider Enseignant : Evidence and the Use of Experts in International Arbitration

From Revisions to Reform? Roundtable Discussion on Revising the 1976 UNCITRAL Arbitration Rules to Meet New Demands

The Search for the Truth

06/02/2009 Zurich Michael E. Schneider Conférencier : Cross-examination – How helpful is it for finding the “Truth”?

17/10/2008 Buenos Aires Michael E. Schneider Conférencier : Termination of construction contracts and completion of the works by replacement contractors & Report of the ICP session on Adopted Projects on recent developments in the Swiss Alptransit Project

The Rise of international arbitration in the Gulf States

Istanbul Chamber of Commerce (ICOC), Association of the Mediterranean Chambers of Commerce and Industry (ASCAME)

The Revision and Modernization of the UNCITRAL Arbitration Rules

30/11/2007 Istanbul Michael E. Schneider Conférencier : Revision of Section III of the Regulation on the arbitration

How to Tailor Arbitrations to Fit the Individual Case