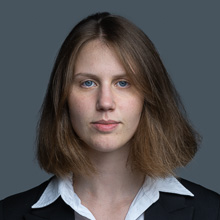 Prior to joining LALIVE, Anna Korshunova worked as a junior associate at a leading Russian law firm in Moscow dealing with M&A, corporate and commercial law (2015) and later international arbitration (2016-2017).  Her experience includes acting in arbitral proceedings under main arbitration rules, including disputes arising from international sale of goods agreements, share sales, joint ventures and large projects. She also regularly acts as a tribunal secretary.

She is a member of numerous professional associations including the International Bar Association, Young ICCA, ArbitralWomen, ASA below 40 and Russian Arbitration Association, as well as of RAA Working Group on investment arbitration.

«Yours badfaithfully» - How to Detect the Sabotage in the Process