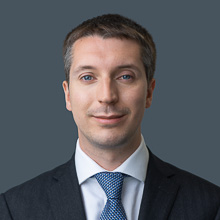 Robert Bradshaw joined LALIVE in 2019 and specialises in international commercial and investment arbitration. He has acted as counsel in a number of arbitrations under the ICC, LCIA, ICSID and UNCITRAL Rules, applying various procedural and substantive laws, in both French- and English-language proceedings. He has represented clients in sectors including the energy, mining, media and telecommunications, construction, IT, healthcare, food and hospitality industries.

He is a member of various professional associations, including the ICC Young Arbitrators Forum, Young ICCA, the CIArb Young Members Group and the LCIA Young International Arbitration Group. Currently, he is the UK Vice-Chair for the Young ITA, the under-40s branch of the Institute for Transnational Arbitration.

Before joining LALIVE, Robert Bradshaw trained with Hogan Lovells in London (2014-2016) and went on to work as an associate in the firm’s international arbitration team in Paris (2016-2018). He graduated from the University of Birmingham in 2013 with a degree in Law with German, having spent a year studying at the Free University of Berlin. He also holds a Master of Laws from BPP University, London.

Deception and detection: the use of technology in assessing witness credibility

When there’s smoke but no fire: English court rejects defence based on “indicia” of corruption

How to Obtain Evidence from Third Parties: A Comparative View