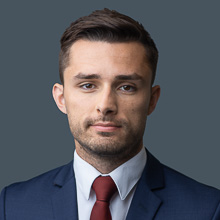 Robert Denison joined LALIVE in 2019 and specialises in international commercial and investment treaty arbitration, as well as public international law. He has a particular focus on the energy and mining sectors, as well as experience working on disputes in a range of other industry sectors, including construction, commodities, hospitality and the automotive industry.

Robert has worked as counsel in arbitration proceedings under most of the major arbitral institutional rules, including ICSID, ICC, LCIA, SIAC and UNCITRAL. He has also worked as tribunal secretary.

Since August 2021, Robert has been a member of the Executive Committee for London VYAP, an association for junior practitioners connected to London. He is also a member of several other professional associations, including the ICC YAF, LCIA YIAG, Young ICCA and London Young Mining Professionals.

Before joining LALIVE, Robert trained with Herbert Smith Freehills (2017-2019) which included seats in the firm’s international arbitration groups in London and Paris. Robert studied Law at Cambridge University (BA, 2016) and spent a year at the Universidad Autónoma in Madrid. He completed the LPC at BPP University, London (2017).