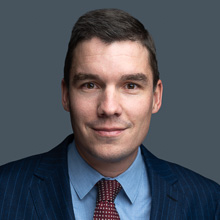 Simon Bianchi re-joined LALIVE in 2022 as an associate. His main area of practice is international commercial and investment arbitration involving a variety of sectors. He has acted as counsel in numerous arbitration proceedings under various procedural rules, including the ICC Rules, UNCITRAL Rules, LCIA Rules, and Swiss Rules.

Simon Bianchi holds an LL.M. from Columbia University Law School (2022), where he was a James Kent Scholar. He also holds a Bachelor of International Relations (2015), a Certificate in Transnational Law (2016), a Master’s degree in Business Law (2017) and a Certificate of Advanced Studies in Legal Professions (2017), all from the University of Geneva. He was admitted to the Geneva Bar in 2019.