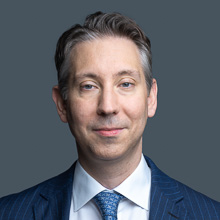 Nicolas Ollivier joined LALIVE in Geneva 2012 and in 2021 was promoted partner. He specialises in banking and finance litigation, an area where he has contributed to developing the firm’s expertise and practice. He regularly advises and represents clients in complex cases involving margin calls, fund mismanagement, fraudulent transfer orders, bank bankruptcy, freezing of accounts, financial frauds, FinTech, tokenisation as well as in administrative and enforcement proceedings before the Swiss Financial Market Supervisory Authority, and other high value, cross border commercial litigation matters.

Before joining LALIVE, Nicolas Ollivier worked as an associate with FBT Avocats SA, in Geneva, in the banking group (2011-2012). He previously trained with Boivin & Nussbaumer in Fribourg (2005-2007).

SWISS GOVERNMENT TO SHINE A LIGHT ON GREENWASHING

Successful group action against a Swiss bank for money laundering

The Cum-Ex tax scandal - a fraud on the investor?

Getting the Deal Through, Risk & Compliance Management 2021

Discontinuation of LIBOR: Have the Replacement Rates Passed the Covid Test?

Margin Calls – How can investors protect their position?

The stumbling block in asset management disputes: the quantifcation of damage in Switzerland

Third-country firms’ access to the EU market under MiFID II: between fragmentation and harmonisation

Attachment of state assets – a better weapon than immunity: the independent legal personality of the state-owned company

Roundtable on Swiss Federal Supreme Court Decision on Retrocessions: Lessons to Be Learnt

11/12/2012 Geneva Nicolas Ollivier Speaker: Retrocessions: Where Do We Stand?

For more information, see the programme and the presentations.

“Banking and finance disputes: to arbitrate or not to arbitrate, that is the question” An article co-authored by Nicolas Ollivier and Caroline dos Santos