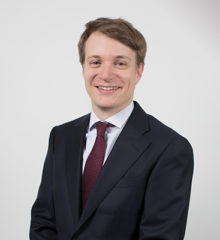 Sam Moss is an international arbitration lawyer trained in both civil and common law, and focuses on disputes in the construction and energy sectors.

He has acted as counsel or arbitrator in numerous international arbitration proceedings conducted under the ICC Rules, the Swiss Rules, the DIAC Rules, and the ICSID Convention, and governed by a variety of substantive laws, including Swiss, Ukrainian, Qatari, US, Lithuanian, and Public International Law.  He also assists clients with the management of claims in construction projects, and on the drafting and negotiation of construction contracts.

Prior to joining LALIVE, Sam Moss was Assistant Legal Counsel at the Permanent Court of Arbitration in The Hague (2006-2007), and served as a law clerk to a judge of the Quebec Court of Appeal (2005-2006).

He is pursuing an MSc in Construction Law and Dispute Resolution at King’s College, London, and holds a Master of International Studies in International Law from the Graduate Institute of International and Development Studies in Geneva (2007-2009), and joint common and civil law degrees (B.C.L./LL.B. (Honours), with great distinction) from McGill University (2006), where he served as Executive Editor of the McGill Law Journal (2005-2006).

Listed among the Future leaders in Arbitration.

Samuel Moss is regarded by clients as a "very impressive young lawyer who will go far".

Samuel Moss receives widespread praise from peers and clients. He is described as "a rising star" with a "fine grasp of the complex technical issues".

The Application of Swiss Law to FIDIC Contracts

Employer termination of a construction contract

The consequence of skipping a mandatory pre-arbitral step

Swiss law vs English law on contract interpretation: Is Swiss law better suited to the realities of international construction contracts?

UK versus Swiss law on contract interpretation: which approach is best suited to international construction contracts?

Guide to ADR in Construction in Switzerland

Additional works performed with owner’s knowledge but without formal approval

Changes to The Swiss Law on General Terms and Conditions: What Do Construction Practitioners Need to Know?

Enforcement: Swiss courts may dispense with the requirement of a full certified translation of an award under Art. IV(2) of the New York Convention

A primer on pathological arbitration clauses in Swiss law

Failure of performance tests and contractual grounds for termination

The new FIDIC Rainbow: What does it mean for construction arbitration?

The Digitalization of Construction Projects: what does it mean for construction arbitration?

13/10/2016 Toronto Sam Moss Speaker: Don’t hold your breath, and other lessons from Europe

27/11/2015 Minsk, Belarus Sam Moss Speaker: The FIDIC Conditions in the light of the laws of civilian jurisdictions

The Role of Counsel in Document Production: How Far Should the Duties Go? What Are the Sanctions?

International Construction Projects Committee – Say What? The Rules of Interpretation at Civil and Common Law